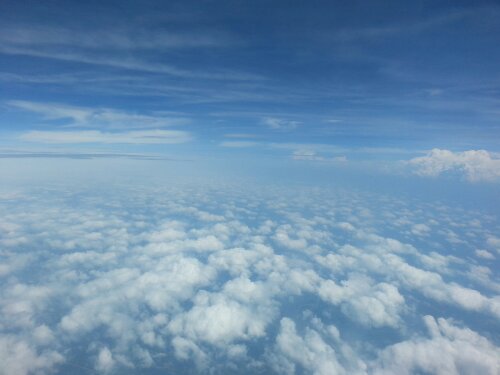 My views today are a bit different than usual. They include windows, escalators, airplanes, and tons of people rushing around and looking unhappy.

I’m writing this from my gate in the Charlotte airport, about to board my second flight for the day. This one ends in Sarasota, which makes me smile.

When I looked up after that last sentence, still smiling, I made accidental eye contact with a lady across from me. She did not smile back.

Until this point I’ve done my best to answer questions on an individual basis, but I thought it’d be easier to answer some of the more common ones all at once. So here we go…most of these come from comments or conversations with friends, and I may or may not have added a couple that I imagine someone wanting to ask.

How did you plan for this?
Reading through lots of blogs like this one and browsing online forums, especially WhiteBlaze. That helped me prepare in terms of gear, knowing how much money I would need, and at least some of what to expect starting out. But as far as day-to-day planning, I don’t do much. One of my favorite aspects of this experience, especially for the last few weeks, has been waking up most days with no plan. I walk until I don’t feel like walking, and then I stop. (That’s why it was hard for Care to plan her trip and why I’m so bad about announcing mail drop locations.)

Some people plan much more. If they have a deadline for work or school, or if they stocked up on food ahead of time and are mailing themselves packages along the way, then it helps to have at least a vague itinerary.

What’s been your favorite section so far?
I decided to get the impossible questions out of the way early. My answer to this changes pretty frequently, but one of the top contenders is the Tennessee stretch that includes the Roan Highlands, Overmountain Shelter (remember the big barn with the bluegrass music and the rainbow over the valley?) and the grassy balds north of there. Of course it helps that Caroline and Ben were visiting while I was there.

I’ve been surprised by how much I have enjoyed Virginia, too. The farm country south of Atkins made for one of my favorite hiking days so far, McAfee Knob and Tinker Cliffs were fantastic, and the Shenandoahs have been everything I hoped they would be.

Your least favorite section?
Georgia…though my condition at the start probably had something to do with that. Also, the trail coming out of Pearisburg wasn’t much fun. It bordered an industrial zone with a bunch of barricades and signs making me feel unwelcome, followed by a brutal climb and a rocky ridgeline with a long distance between water sources.

How long do you go between town stops?
Not counting the last week and a half, when I was in spoiled hiker mode, I usually go four or five days. (The longest, I think, was the eight days through the Smokies and to Hot Springs.) Sometimes I get to town, re-supply and then get right back on the trail, other times I stay at a hostel or hotel. About once every two weeks I take a zero day, which involes two nights indoors and a full day of laziness.

What was your favorite town stop?
Toss-up between Hot Springs and Luray. Luray is a place I could see myself moving to at some point.

How is trail life different for women?
It’s definitely harder for them to pee in the woods, and they have to worry more about pink-blazers.

Most of the girls I’ve hiked with worked out their own set of boundaries before they started the trip…things like not hitchhiking alone, being vague if someone they don’t know well asks about that day’s plans, and, if there’s a road crossing with parked cars nearby, waiting in the woods until a hiker they know comes along before going across. Mostly common sense stuff. J-Rex told me once that my creeper radar doesn’t work very well, but I’d say that 95 percent of the people I’ve met out here are friendly and looking out for each other…for the other five percent, many hikers (not just girls) prefer to stick with a group they’ve come to trust.

What’s a pink-blazer?
I was really hoping you’d ask. You might have noticed that approximately a billion of the photos I’ve shared include the white blazes that mark the trail. White-blazing, then, is just walking the AT. Side trails are marked with blue, so you can blue-blaze to water sources, shelters and scenic points. Then there’s yellow-blazing, which means walking along a road to bypass part of the trail, or aqua-blazing,  which is rafting or canoeing past part of the trail (often the Shenandoahs). So far I’ve been a white blaze purist, and I plan to stick with that, but I love how much people embrace the “hike your own hike” mantra I’ve mentioned before, meaning if someone decides it’s best for them to cover a section of the trail differently, nobody judges them. (“Hike your own hike” could be applied to other areas, too. You dropped everything and left a stable job to come walk in the woods? Hike your own hike. You decided not to get married and start having kids right after school? Hike your own hike.)

That’s a long way of getting back to the question. A pink-blazer is someone, usually a guy, who fancies another hiker, usually a girl, and sets their pace to stay close to that person. It can get really uncomfortable…I met a girl a few weeks ago who was averaging about 25 miles a day in an effort to distance herself from an unwanted admirer.

Last but not least is my personal favorite variation, brown-blazing. That’s when someone is sick and decides to keep going, so they end up having to deal with very expressive bowel movements on the trail.

Gross. Speaking of that, how often do you poop?
About once every three days when I’m on the trail. When I’m in a town, four or five times a day.

That doesn’t sound very healthy.
No, it’s probably not. Let’s change the subject.

Have you seen any bears?
Two!

Ticks?
Tons. I’ve had to brush them off me several times now, and I found one behind my knee that was dug in pretty well. I really, really hate those things.

What do you eat?
On the trail, pretty much anything I can just add to boiling water–Ramen, mac and cheese, instant potatoes, dehydrated meals if they were available in the last town. Plus tons of snacks. Protein bars, peanuts, peanut butter Snickers, tuna, Pop Tarts…whatever looked appealing on the last town stop.

In town, I eat anything I can find. It’s hard to carry fresh vegetables on the trail, so I usually start with a big salad…but then I might follow that up with a couple cheeseburgers and a milkshake.

What do you crave the most while you’re hiking?
This is probably the number one topic with other hikers. My most common answers are Nancy’s Barbecue, Chipotle, Sweetberries and Dr. Pepper. There are more than a few hikers who, after hearing me talk for miles about the Pork Debris sandwich, might travel to Sarasota someday just to go to Nancy’s.

Do you worry about gaining weight after you finish?
Yep. There will have to be some pretty drastic changes immediately after coming home from Maine. Either that or I’ll just start preparing to hike the Pacific Crest Trail next year.

(I am semi-serious about that last part, but I’m trying to just enjoy this trip one step at a time for now.)

What has surprised you most?
I had pretty big expectations starting out, and one big surprise is the way that my expectations, both good and bad, have been exceeded. That means the highs–the views, the people, the sense of accomplishment–are much better than I imagined, and the lows–the aching body, the difficult terrain, the wondering if I’ll finish–have been much lower than I expected.

I’ll be more specific on one of those points. I had heard stories about bonds between hikers, but actually experiencing it has been so much more exciting. As a fairly introverted person, I have never, except maybe starting college, connected with so many people so quickly.

I guess being out here means there are some immediate shared interests, then you add in the fact that we’re all attempting this crazy thing, we have some of the same doubts and fears, and there is a whole lot of time to talk. More than that, there is a whole lot of time to think and talk. That means if someone I’m walking with says something that makes me think, it’s not awkward if we walk in silence for an hour before I add to the conversation. (I’ve gotten a reputation for taking that to an extreme…like running into somebody I hiked with weeks ago and continuing our conversation.) I have learned a ton from the folks out here, even some whom I’ve only seen a few times.

Then there are the people surrounding the trail. The ones who leave coolers of soda and water for hikers, or set up by their cars with snacks, drinks, or even full grills with burgers and hot dogs. The ones who wait at road crossings just in case a hiker comes by needing a ride. The ones who pick you up when you’re hitchhiking, then show you around town and give you their number in case you need anything else. (They’re even polite about cracking the window discreetly when they realize how bad we smell.)

These people take pride in the trail and want to help take care of those of us using it. That overwhelming generosity, and the way it seems to show up exactly when I need it most, might be the biggest, and the best, surprise.

How is this hike changing you?
This is getting dangerously close to a therapy session. First the obvious: I’m skinnier, my beard is longer, and my feet are about a size and a half bigger.

For the rest, I might return to this question in a few months. It definitely is affecting me–my confidence, how I interact with people, the way I carry myself and the way I decide what I need to carry with me.

But all of that is a work in progress. We’ll talk more later.

So that’s a good ending point. I didn’t get to all the questions I wanted to, but this is really long and I’m tired. Since I started writing this, I landed in Sarasota, ate dinner with my mom, visited with family at the beach, and now I’m settled in for the night and watching basketball.

I might write something else before getting back on the trail Monday. If not, I’ll see you here after the next section, which includes the end of Virginia and the official halfway point of the trail.

As always, thanks for reading.