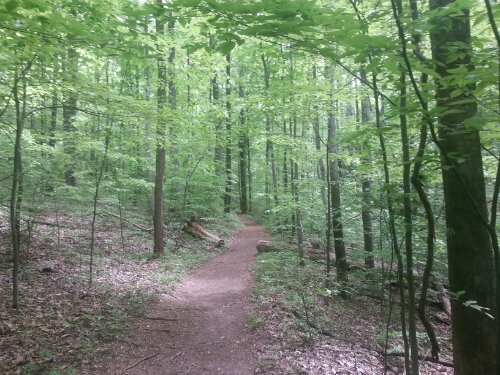 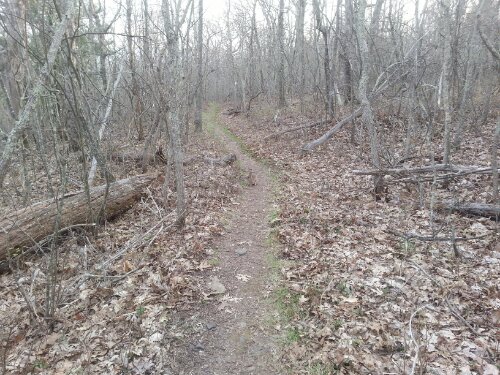 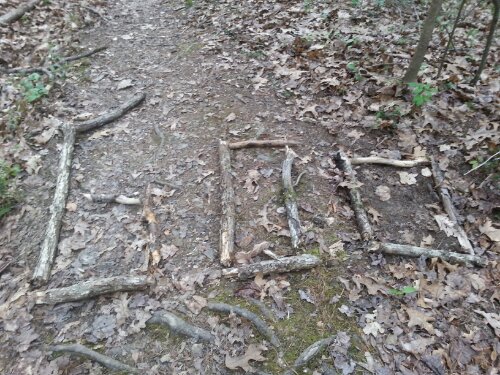 Spring was springing very, very slowly for a while. The intermediate stage lasted for weeks–green trees at lower elevations, flowers blooming occasionally, but everything brown again when I climbed high enough. For a little bit, it felt like spring was chasing me, barely catching up one day only to fall a step behind the next. 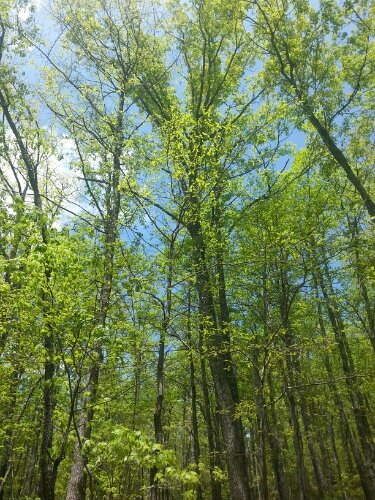 Then, all of a sudden, it was here. I had a week of clear, sunny weather, the trees are green and growing greener by the day, and the woods are coming to life: snakes, spiders, deer, and a greater variety of birds than I ever imagined hearing at once (mostly beautiful and inspiring, except for one car alarm bird that insists on singing in the middle of the night). No bears for me yet, but others have started seeing them. 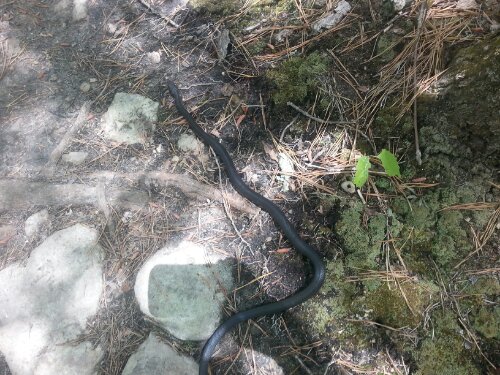 In Pearisburg I got a ride to the MacArthur Inn, a gorgeous, historic building with pictures of tons of famous people who stayed there in its heyday. The hotel’s seen better days, and the “hiker room” was a barely renovated storage closet. But the shower down the hall was hot, the restaurant, laundry and grocery store were all next door, and breakfast was delicious, so I wasn’t complaining.

For the first time I am really seeing evidence that the hiker bubble is thinning–partly because our varying paces have spread us out, and partly because so many people have decided to end their hikes and go home. I actually had two consecutive days of camping alone at night and hiking the entire day without seeing anyone. I loved it the first day, but toward the end of the second it started feeling a little eerie. 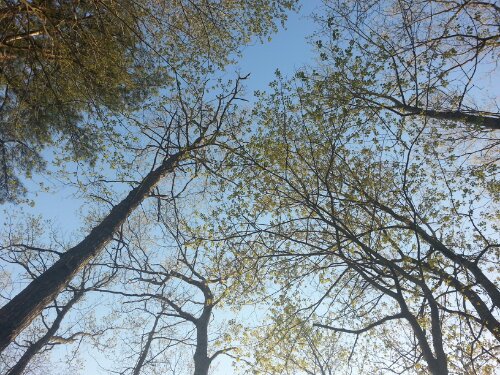 So I was glad to reach the Captain’s at the end of a hard day out of Pearisburg and find a few hikers I had met before: Apple, Dr. Zoom, Rosie and Blue Jay. The Captain lives across a stream from the trail, and he set up a zip line and lets hikers camp in his yard. He also keeps a fridge stocked with sodas on his porch, which is a huge motivation on a long, hot day. 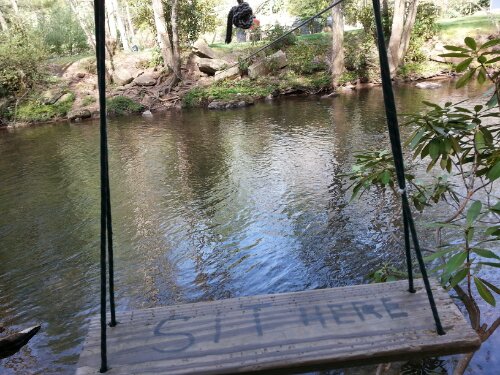 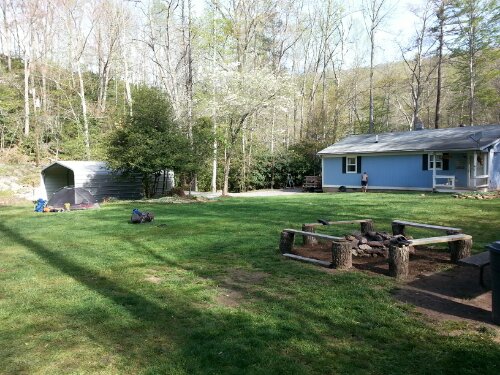 I walked alone for most of the next day and pushed past the shelter where the others planned to stop so I could camp alone by a creek a couple miles farther on.

Then Saturday, I reached a huge rock formation called Dragon’s Tooth. This was the first day in a while that it was raining, so no pictures. The climb up to Dragon’s Tooth wasn’t too difficult, and the rain was actually a relief after the hot days. But the climb down caught me off guard. It was the first time this whole trip that I felt like I was in over my head–not in a “This is hard; I’m not sure how long I can keep going” kind of way (that’s happened plenty of times), but in a “This is dangerous; I probably shouldn’t be out here” kind of way. The trail climbed straight down a long series of steep, almost vertical, rock faces. The rain meant I never felt like I had firm footing, and a handful of times I had to toss my poles ahead and climb with my hands or sit down and slide on my butt. 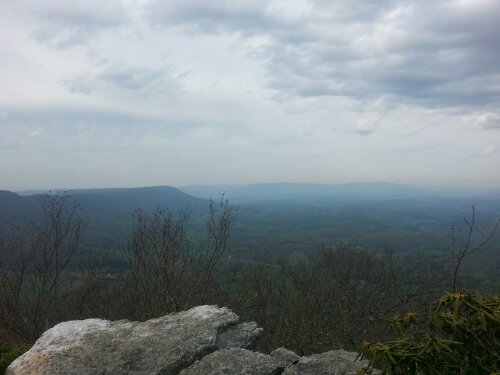 When I finally reached the road crossing at the bottom, soaked, filthy and sore, I was done. I’d had plans to go at least 10 more miles, but I decided instead to call it a short day and walk down the road to Four Pines Hostel, a bunkhouse in somebody’s garage. A few others ended up there too, and I was relieved that they had been caught off guard by Dragon’s Tooth as well. 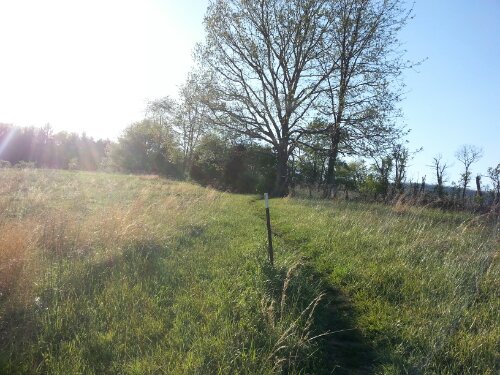 The hot shower and bed (two pool deck chairs folded down and stacked together) were nice, but the main attraction at Four Pines is the free shuttle to the Homeplace, an all-you-can-eat, family-style restaurant. Eating there is like a sporting event. The waitress brings several bowls of chicken, roast beef, ham and sides, you load up your plate and pass everything around, and she keeps bringing back more for round after round until everyone’s stuffed. Scoop, pass, eat, repeat, repeat, repeat. And everything was delicious. 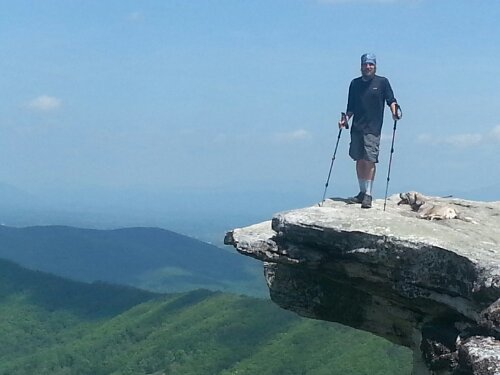 Sunday’s hike included McAfee Knob, considered the most photographed spot on the Appalachian Trail. It was a pretty day, and the trail was the most crowded I’ve seen it since Newfound Gap in the Smokies–which means lots of fun conversations with clean-smelling day hikers about why I’m carrying so much in my pack.

My ankle was hurting a lot that day…I think I twisted something climbing down Dragon’s Tooth, and it was making me miserable. I was hobbling down McAfee  and up the next climb. But it was hard to stay in a bad mood when I reached Tinker Cliffs, a half-mile walk with views back to McAfee and boulders that were easy to navigate. That was one of my favorite parts of the trail so far, and it was a complete surprise since McAfee gets so much attention.

I hiked a short day into Daleville yesterday, and today I’m taking my first zero since Damascus…a day earlier than I originally thought, but a day later than my most ambitious plan thanks to the unexpected hostel stop. I am re-supplied, clean and eating constantly. (Speaking of eating, thank you Mel! It’s taking all of my self-discipline to save some of these goodies for when I’m back on the trail.) Tomorrow I’ll head back out and try to do some big days…my ankle is feeling mostly better, but I’ll keep an eye on it to make sure it’s nothing serious. 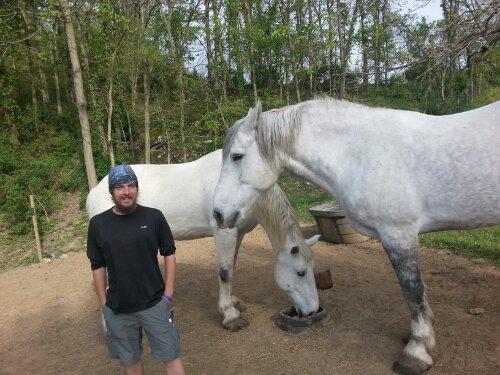 On another note, the reason I’ve been trying to ramp up my mileage (besides wanting to know that I can, which is a good feeling) is that I’ll be taking a few days off at the end of the month. My friend/younger brother Chris is graduating from high school, and knowing I’d miss that was probably my biggest regret in planning this trip. So when I started thinking that a few days off the trail might be good for me before starting the second half, and then I realized that I could time those days with Chris’s graduation, I was thrilled. 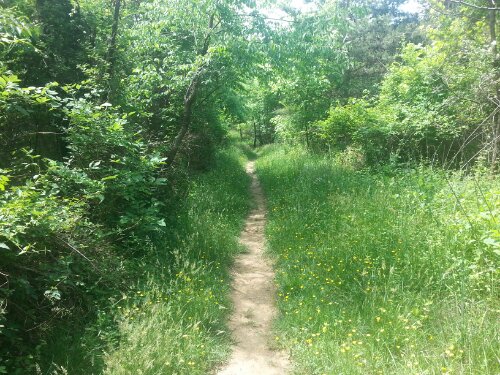 So I’m getting off the trail, probably on the 28th or 29th, and I’ll be in Bradenton for about four days. That means I want to get a few days ahead of Tank now so it won’t be too hard to catch up when I get back. I had gained a couple of days before stopping at Four Pines, now it’s just one day…hopefully this next stretch will include a few big days that buy me some leeway.

The trail has been hot and rocky, but beautiful…I am still loving Virginia. There are a few days of rain coming up, which will probably be a nice relief for about 20 minutes before I’m tired of it and everything’s soaked. So here’s to hoping for well-rested limbs, a strong mental state and lots of motivation moving forward.