Somewhere along the way, some of us bought into the misguided notion that the trail was going to be significantly easier after crossing into Virginia. Turns out it’s the same trail, with the same rocks, the same steep climbs, and the same knee-jarring descents…but I love it.

I left Damascus knowing that several days of bad weather were on the way. I gathered in bits and pieces that people all over the country are being affected by this mess, but I didn’t realize how severe it was until seeing some reports after getting into Atkins today. I hope everyone reading this is staying dry and safe. 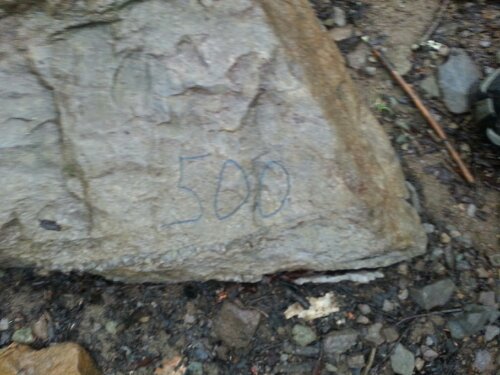 We definitely got our share out here, but again, I’ve been extremely fortunate with the timing. There’s been a pattern of severe morning downpours ending right around the time that I start walking, a couple lighter showers during the day, then another downpour once I’m set up for the night. It’s been by far the most severe and prolonged rain I’ve seen so far, but I’ve managed to stay relatively dry, for which I am abundantly grateful.

The one exception to my luck was more about wind than rain. The second day after leaving Damascus I walked across Whitetop Mountain, a long, exposed bald with crazy rock formations–I imagine it’s beautiful if you can see more than 10 feet through the fog in front of you. By the time I got up there, the wind had picked up to what felt like hurricane levels…every time I lifted a foot I’d get blown sideways, almost off the trail. But it was fun when I started pretending that I was climbing Mount Everest. I ran into Time to Eat in the woods on the other side of the ridge, and he said he had to chase his pack cover down in the wind…while running after it, off the trail, he realized if he fell and broke something, no one would be able to hear him over the wind if he tried calling for help.

But we made it to the shelter in one piece and mostly dry, and that night Tank pulled a giant chocolate muffin from his pack as a surprise for my birthday. He’d hiked with it for two days since Damascus and somehow managed to keep it intact. When every ounce in the pack makes a difference, that kind of gesture means a ton…he even brought a candle. And the muffin was delicious. I had every intention of sharing it with the others around the shelter until I took my first bite and immediately scarfed down the rest.

On my birthday we reached the much-anticipated Grayson Highlands, where wild ponies wander around the trail. This was after the heaviest night of rain, and the skies looked on the verge of unleashing again the whole day, so the trail was a river. It was fun watching Tank try to dodge the deepest puddles for a while, until eventually we gave up and just started sloshing through them.

I would have loved to be able to enjoy the views there, but the combination of the grassy highlands, the rock formations (even a full-on rock tunnel called Fatman Squeeze) and the dense fog made me feel like I was in Braveheart. I could practically hear William Wallace urging me over the next hill. (No pictures from that section…my phone was buried pretty well to stay dry that day.)

We did a big day Wednesday, just shy of 20, to get to Partnership Shelter. It’s right up a hill from the Mt. Rogers Visitor Center, with a vending machine inside and a phone on the wall for ordering pizza delivery. That was our inspiration for pushing through a long day, and it was worth it. It’s a popular shelter, though, for the reasons above, so falling asleep was tricky with the talkative group…someone even broke out a bunch of sparklers at one point. That looked pretty cool from inside the shelter, the sparks lighting up the fog, but by that point most of us had been trying to sleep for a while. It was the first time I seriously considered packing everything up and going for a night hike.

Today we planned a shorter 12 miles into Atkins for lunch, laundry, showers and a hotel for the night. I hiked alone the whole day, which I’ve missed lately. (I told Tank that if I don’t get some alone time every few days I start to get cranky.) It was a hard morning with lots of steep climbs and tricky rocks, but the last five miles were amazing: gentle downhills, grassy fields with views of rolling hills through farm country. I felt like I was walking in a Wendell Berry poem, and it didn’t hurt that this was the first day since Damascus that I’ve seen blue skies. I am now a big fan of hiking in Virginia. 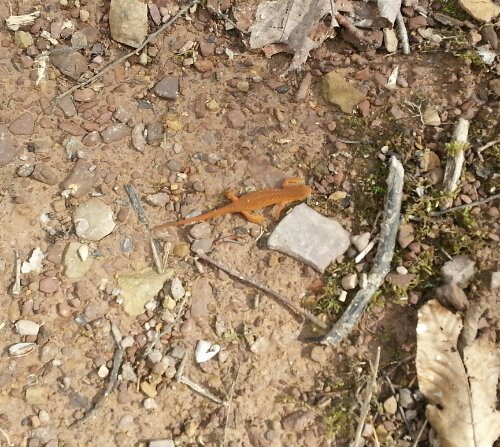 I even passed an old one-room schoolhouse next to the trail with a cooler of ice cold Cokes in front of the blackboard for hikers. 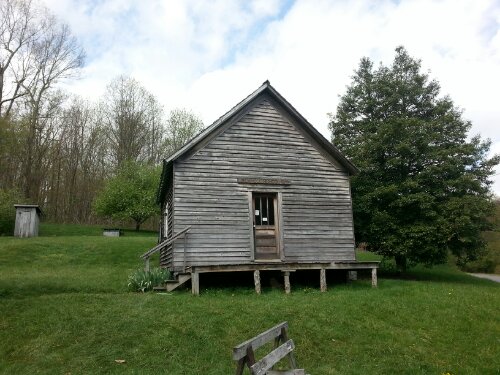 My spirits were high coming into Atkins, even more so after Tank and Time to Eat got into town so we could go for lunch. Now I’m showered and have clean clothes, and I might even get to watch some playoff basketball tonight.

Then it’s back to the trail in the morning. We’ve got a good pace going, and today we passed the official 25 percent mark for the whole trail, which was a great feeling.

My next zero day will be in Daleville, which has a Cracker Barrel and a barbecue joint I’ve heard a lot about. I’ve been daydreaming of both those things while hiking lately, so that will be a good stop.

Here’s the address of an outfitter that will hold packages for hikers. On that note, a huge, huge thanks to Brittany, Louie and Melissa, and Riann, Mike and Chris for everything they sent to Damascus. That was an excellent day.

(Again, please let me know if you decide to send something in case my plans change.)

As always, thanks for reading. It means so much to me that people are enjoying following this trip.